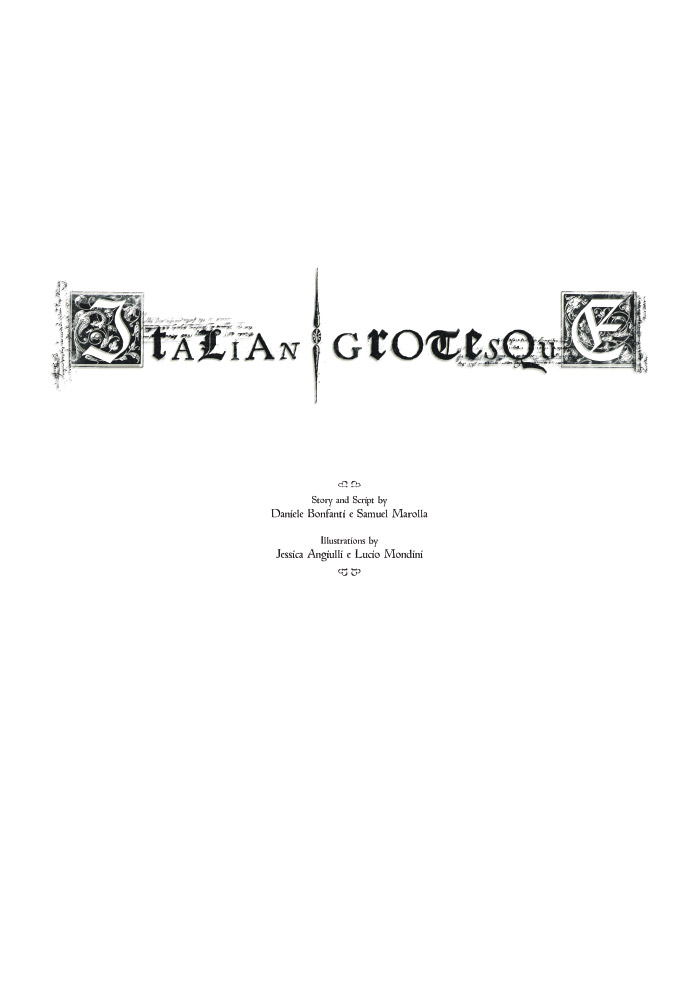 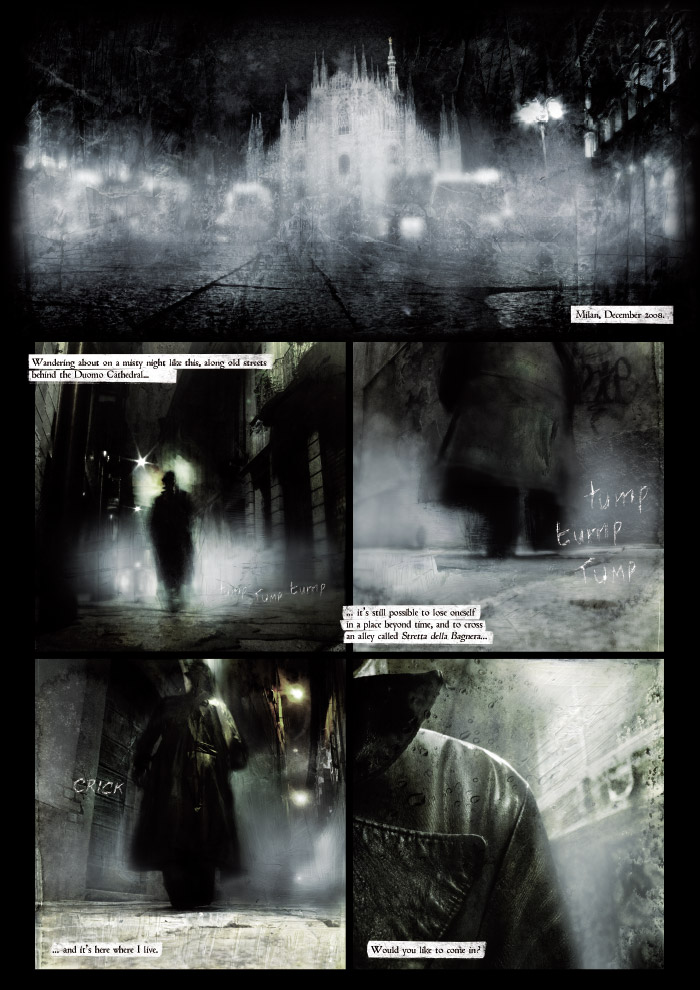 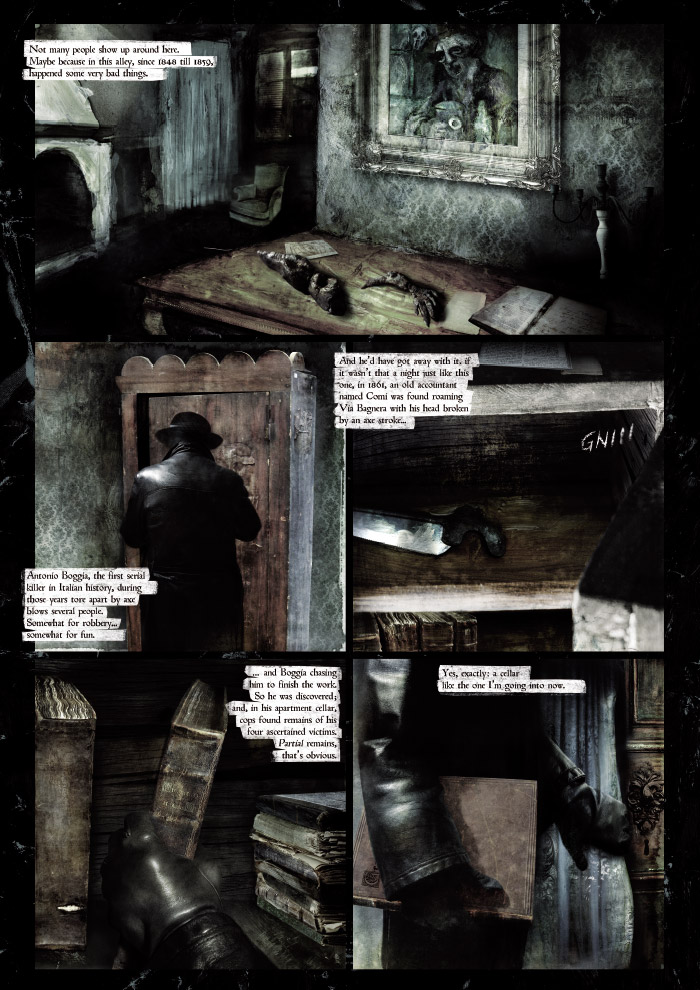 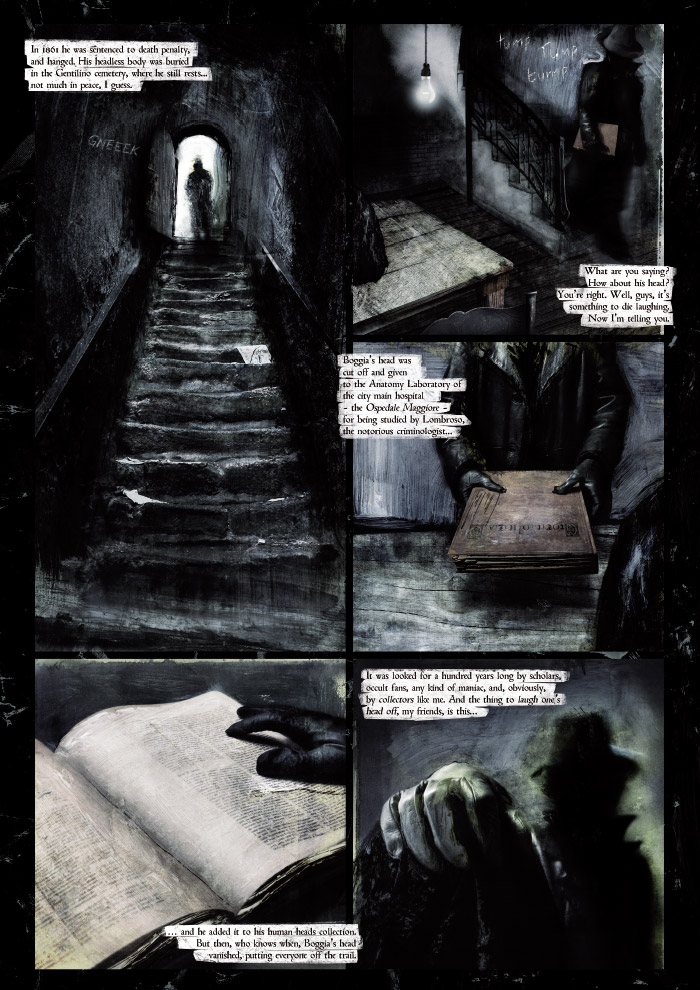 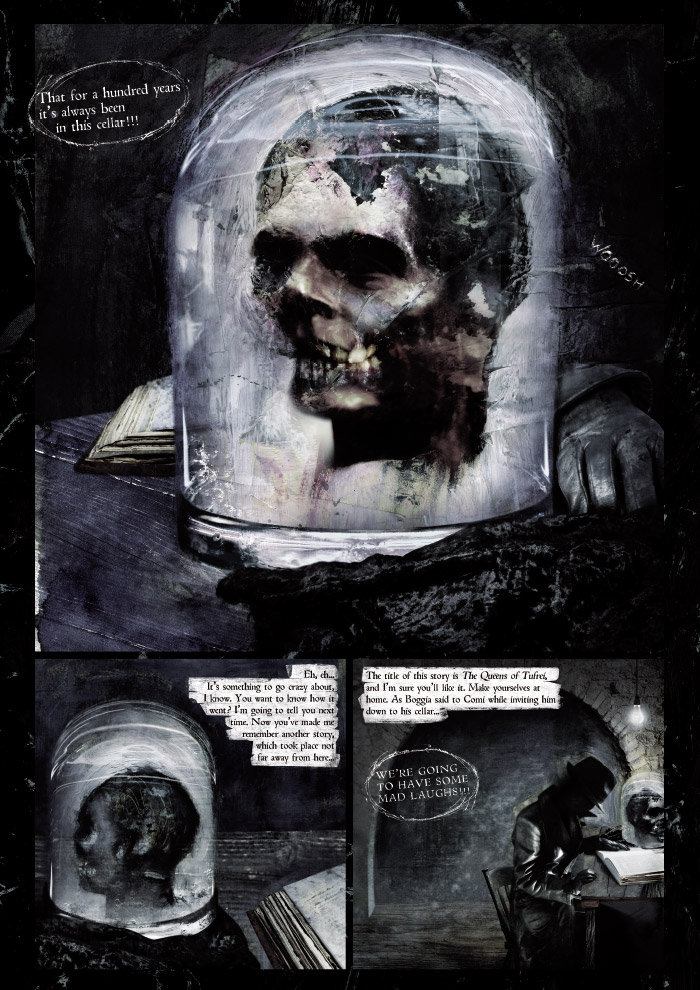 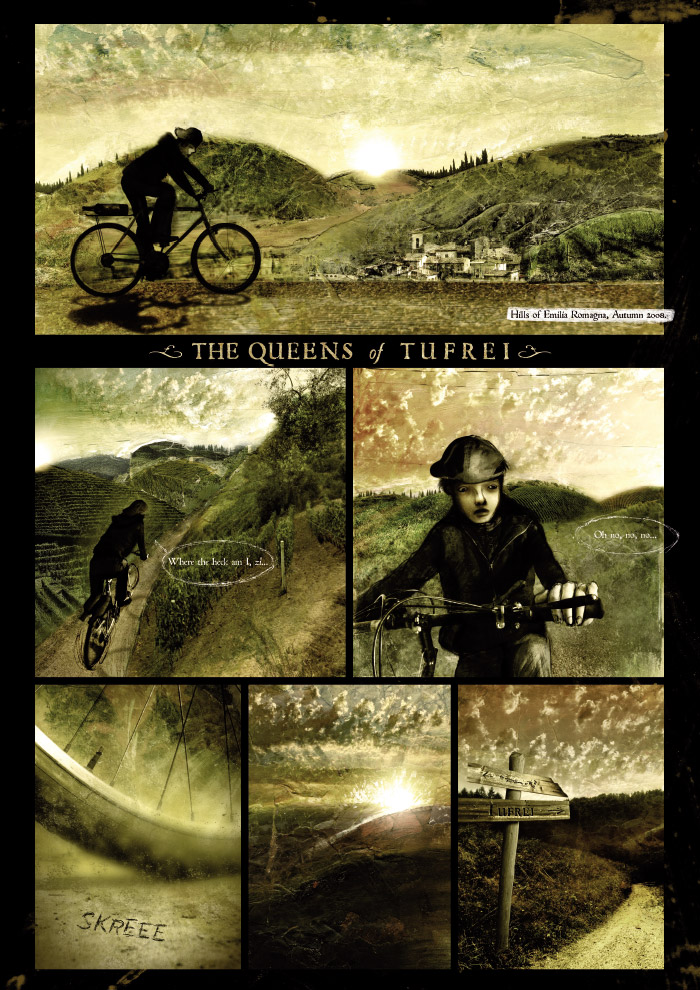 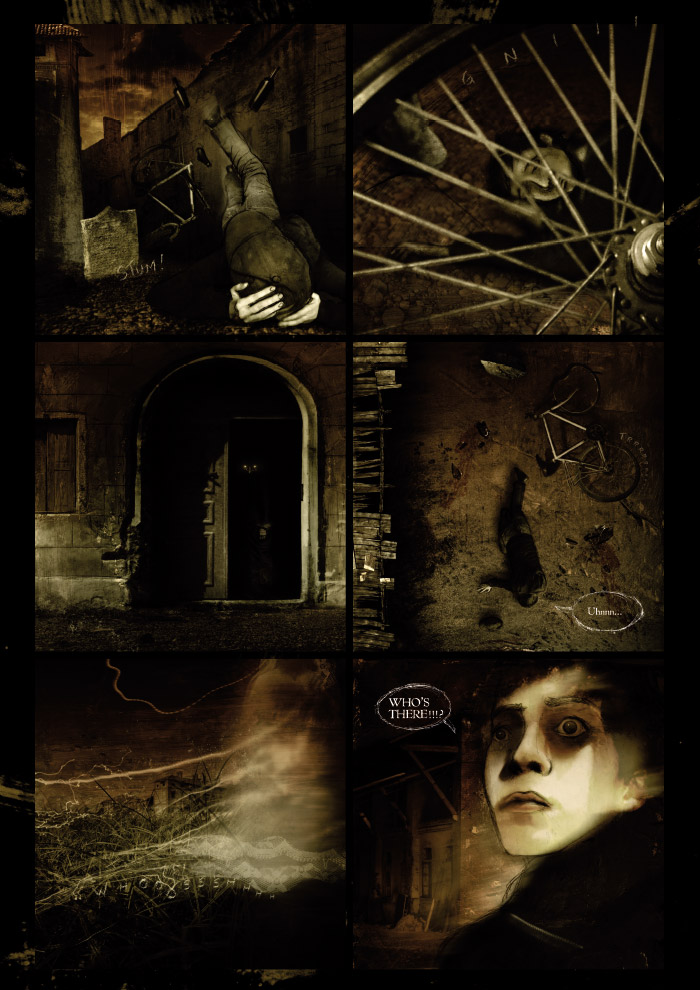 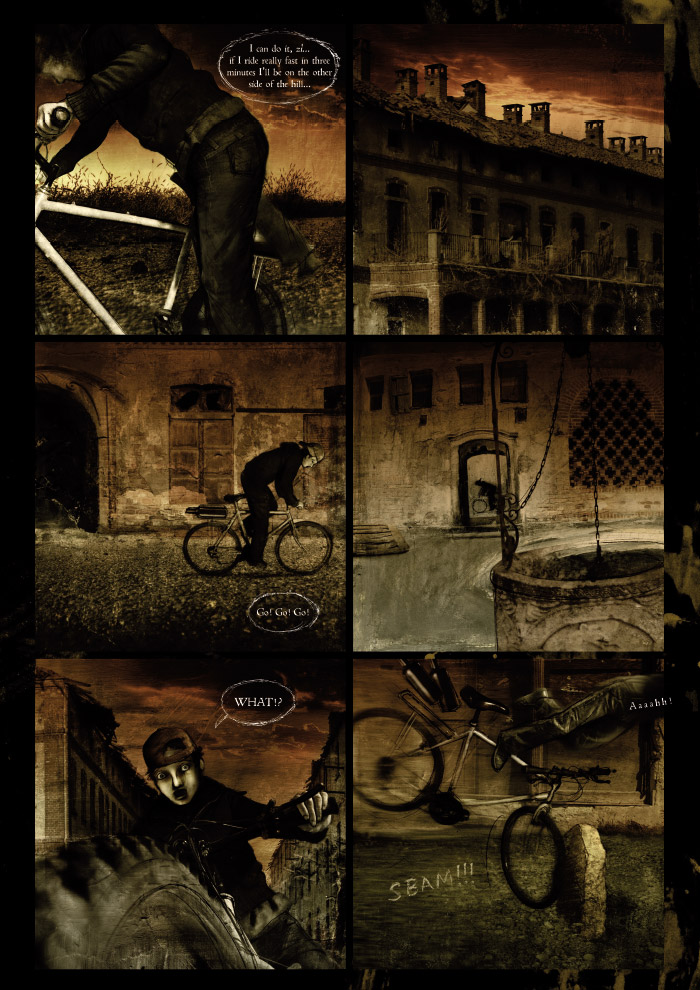 Artworks for the graphic novel “Italian Grotesque”, story and script by Samuel Marolla and Daniele Bonfanti.
The project is still unpublished.

Boggia’s Head (frame-story)
Antonio Boggia, the first “documented” serial killer in Italian history, during the Eighteenth Century second half, terrorized Milan by his brutal murders. Hanged in 1861, his head was cut off and given to the Ospedale Maggiore – the main hospital – Anatomy Laboratory, for being studied by the notorious criminologist Lombroso. The head vanished after a short time and never was found again. A misterious man in black, dressing an overcoat and a hat lowered to cover his face – we are not going to see until the end of the story – shows the reader Boggia’s head in formalin: he has kept it in secret, and he will keep it on the table all the story long. The disturbing narrator will then introduce the four horror stories commenting and linking them together, offering on and on a series of macabre clues about his true identity. In the end, the man will take off his hat revealing he is headless. So he will extract Boggia’s head out of the reliquary, he will thread it on his spine, and will exit into the misty alleys of a modern Milan, to continue his work, left pending in 1861.

The Queens of Tufrei (story by Samuel Marolla)
Since centuries, in a small town of the Emilian hills, a bond is in force between villagers and the witches haunting the farmsteads of Tufrei, an old abandoned town in a slight valley of the country: you shall not come in our territories, we will leave you in peace. What, then, is a young boy doing riding his bike there around, while the sun is setting? And why has it been just his dad who asked him to go there?
At sunrise, the peasants’ rifles will make havoc of the agonizing witches – the young boy was in fact an unconscious bait, bringer of an anti-witch poison; he had been chosen through toss-up among all town people. His father shotting himself into his mouth opportunely closes the story.

Scienza a Due Voci 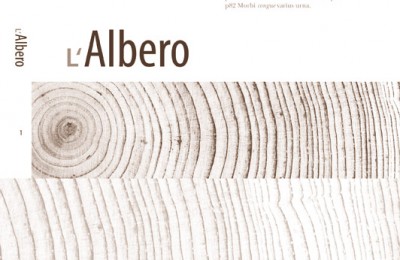 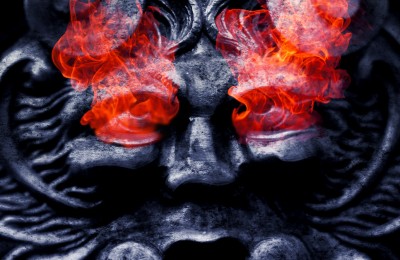 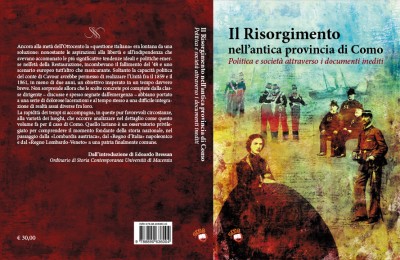